Finding integrated meaning in our lives

I was learning the principles of qigong, a traditional Chinese energy practice, when my teacher told me about the 70% principle.  “In qigong,” he said, ” we only take our movements to about 70% of capacity.”  What a radical notion!  I was used to yoga, where I would enjoy that stretch and the feeling in my body that would tell me when I was at 98%, maybe even 100%, and sometimes, well, maybe even 101%.  That exciting feeling that I was taking my musculature into new territory, new levels of flexibility.  What was 70% going to do for me? 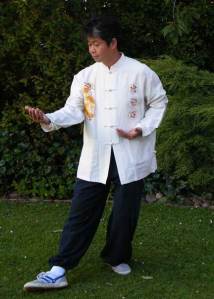 In time, I learned that the 70% principle was one of the most powerful elements of qigong, and it has done more for me that I could have imagined.  By only taking my movement to 70% of capacity, I was able to focus my entire attention on the internal energetic activities taking place in my body when I made a movement, and I was able to do it for as long as I wanted.  Because I wasn’t stretching my body, it didn’t tire out and complain.  It didn’t risk overstretching and causing injury.

But most important of all was the realization that the 70% principle offered kindness to my body.  It caused my body to relax and enjoy each movement.  It caused each fiber in my muscles to gently become part of the movement rather than fighting it.  It taught gentleness to my inner being.  It turned resistance into harmony.

It didn’t take too long before I began to apply the 70% principle outside qigong to other parts of my life.  Working too hard on a chapter of my book and beginning to wear out?  Just take it to 70% of my capacity, then stop for a while.  Trying to make a point in a heated discussion with a friend?  Just get to 70% of the point, then relax and let your friend take it from there.  Trying to achieve certain goals in personal growth?  Don’t aim for the entire goal, just for 70% of it.

It began to dawn on me that this 70% principle was even more radical than I had realized.  Hell, it was more radical than communism!  If our entire society started to work on the 70% principle, our whole global capitalist economy would fall apart.  I came originally from the business world, where I was used to the cliché of 110%.  When you wanted to impress your boss that you were trying really hard, you’d tell him “I’m going to give it 110%.”  In the business world, 100% isn’t even good enough.

Stock crash: if applied to our global capitalist economy, the 70% principle would be more radical than communism

Imagine if the CEO of a public company got on the phone and told investors, “This year our company is going to try to achieve just 70% of our performance standards.”  The stock would crash and the CEO would be out of there before the day was out.  And imagine if a whole country just put in 70% of their effort into their gross domestic production.  They would get out-competed by other countries and disaster would arise.

Now imagine if the entire world worked at 70% of capacity.  Well, all of a sudden, everything would be different.  Our unsustainable drive towards global catastrophe would begin to change direction.  The amount of carbon dioxide in the atmosphere would start falling.  People would have more time to spend with their families, to consider those other aspects of their lives which are forever getting left behind.

The 70% principle would save our world, if it were applied across the board.

But since that’s not going to happen any time soon, how can we apply the 70% principle to ourselves?  How can we be kind to ourselves in all aspects of our lives?

Here’s an example.  I was at a meditation retreat, and one of the retreatants had a question for the teacher that reflects a common experience.  “I know that I’m meant to direct my wandering mind back to my breath,” she said, “but how hard should I try to do that?  If I don’t try hard enough, I feel I’m just wasting my meditation.  But when I try too hard, it becomes stressful.”

“Seventy percent!” I wanted to answer back.  But it wasn’t my place, so I just sat there and heard the teacher give an answer that left everyone unsatisfied.

There are so many aspects of life where the 70% principle works.  Once you start applying it for yourself, you’ll find the applications are endless.  As time has gone on, I’ve realized why it works so well, which I’ve summarized as follows:

70% is sustainable and yet it keeps getting you towards where you want to go at a reasonable pace.  It’s like the speed you’d go at if you’re running a marathon.  If you went at 100%, you’d never get to the end.  You could go at 50% of your capacity, but then you’d never really feel you were accomplishing anything.  Or you could go at 70%, and get to the finish line, sweaty and proud, without any injuries.  Life is a little bit like that marathon.   Personally, I want this particular marathon to last as long as possible, and for me, 70% is the principle I use to try to ensure that happens.

Requiem of the Human Soul (my recent novel)